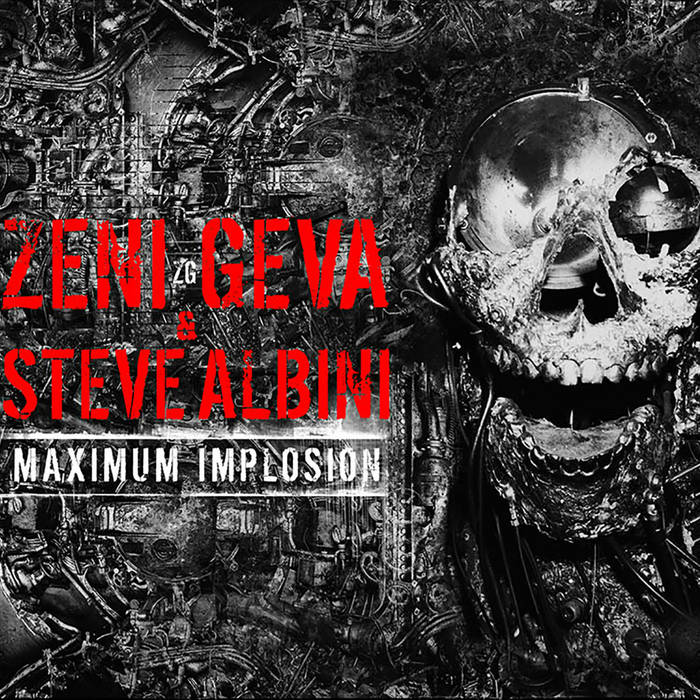 carvas It's great when you can find a streamable version of the songs you have had in your head for th epast 10 years. Stumbling into this album has been a milestone of my year! Favorite track: Nai-Ha.

Liam Francis I wanted to write this song but they beat me to it. Favorite track: Kettle Lake.

inertiatic ESP Best team up ever!!!!!

Ninja Gaijin Choosing a favourite track is almost impossible - they are all amazing tracks. Zeni Geva are for me, the greatest band on the planet. Favorite track: I Want You.

MAXIMUM IMPLOSION collects all collaborative (and most sought after) pieces between Zeni Geva (KK NULL) and Steve Albini (BIG BLACK / SHELLAC): "Nai-Ha" and "All Right, You Little Bastards!". Also included are bonus tracks from the ultra-limited 12"-only "Superunit", presented with meticulous Cedar mastering by legendary mastering engineer Denis Blackham.

All production and mixing by Steve Albini. Final mastering by Martin Bowes at Cage Studios in England, and presented here in its complete form for the first time on Cold Spring.

Presented in a 6-panel double digipak with original artwork/photo by Mitsushiro Hiruma and design/layout by Alonso Urbanos.

"It's fair to say it's an essential release for those already wise to the early work of Zeni Geva who missed any of those releases first time around... despite its heaviness there's no bassist here for the majority of the tracks. Instead tracks lurch and deviate into atmospheric guitar mannerisms and mangled guitar abuse before returning to the ultra-heavy onslaught... Steve Albini continued to work with Zeni Geva but I don't think the results were ever as powerful or as ground breaking as their earlier albums... Maximum Implosion indeed." (8.5/10 Compulsion Online)

"What can you expect when a master of noise (KK Null) joins hands with one of the post-punk/industrial pioneers (Big Black)? You get a merciless and tormenting sonic assault on, which you perfectly recognize, the input of each artist. The typical harsh and very unique guitar play by Steve Albini creates a perfect cacophonous harmony with the noises and screams of Zeni Geva... a real opportunity to (re)discover this common project between opposite artists hailing from very different cultures. The sound and experiment is extreme, but definitely something apart from established projects. Both artists clearly had some fun creating one of the most unexpected sonic fusions, which I guess sounds more Japanese-like than American and/or European" (Side-Line)

"These releases are essential listening for 90’s noise rock fans. I have an obsession with Zeni Geva‘s ‘Total Castration’ perhaps only because I imported it years ago for a fairly high price and tend to covet stuff like that… Uh, but the important thing here is how well guitarist/vocalist KK Null and Albini work together... Albini tends to go full blast with big grooves and Null always searches for the most difficult route to an uncomfortable place. This dynamic is most interesting on ‘All Right, You Little Bastards!’ which is a live album, largely because it doesn’t feel -too- separate from the studio recordings" (4/5 Grizzly Butts)

"With a huge sound reminiscent of Godflesh in its heavy bottom and impossibly high-end guitar tones, resulting in almost no mid-range, it's hard to believe that there are only three people in the band... What saves the record from sounding like an impenetrable wall of sludge are a combination of Albini's sure-handed engineering and production, along with the band's precise grasp of noise, dynamics, and song construction... Anybody into sheer, painful heaviness should check this one out!" (Korperschwache).

"The contribution of Steve Albini, to the heavy form of rock which is the mark of KK Null, is the clean and dry sound which is typical of his recordings and the insertion of more meditative moments in the assault of the Japanese band... The second CD is a live with Albini as a member of Zeni Geva featuring also track from the first CD and where there's a more energy and less sound details with the result that is enthralling... Absolute respect." (Chain D.L.K.)

"Repetitive, hulking riffs and percussion, noisy excursions... The quality of the recordings is astounding and the album definitely seems to capture the monolithic energy of the performances at the time; perhaps think of a noisy brother of Skin Chamber, Gnaw or somewhat less related (from a technical perspective), early Swans. Favourites are the quite unexpected Kraftwerk cover and closer upper "I Hate You" that spirals out of control and ventures into territory that Kishino had already charted 10 years earlier, together with fellow Japanoiser Merzbow... this is a must-have for both fans of Albini and Zeni Geva, but probably also interesting for those who are into (the history of) sludge or noise rock in general" (Vital Weekly)